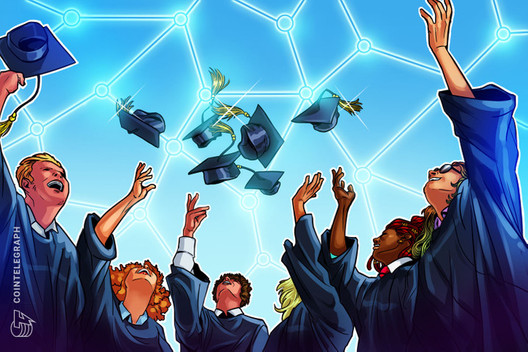 The Superior Agency of Medellín (Sapiencia) in Colombia announced the project “Ciudadela Universitaria de Occidente” which is expected to start training professionals with educational programs in disruptive technologies such as Blockchain by mid-September, according to published this Wednesday the newspaper El Tiempo.

After so many setbacks and after a year and a half of execution, and with an investment of 126,000 million pesos, among the last three municipal administrations, the place where the El Buen Pastor women’s prison was erected, Now there is an educational complex that will promote the development of applications with blockchain in Medellín.

This new institution for higher education in the city contemplates adapting conventional and multipurpose classrooms to accommodate 8,000 young students, who will have the opportunity to have access to higher education in the technological, technical, and work and human development modalities, areas related to the fourth industrial revolution, of which Medellín is considered the capital of Latin America.

The Citadel of the West, has 18 conventional classrooms, 16 multipurpose, a computer center, auditorium, gym, infirmary, cafeteria, sports areas, internal cycle path, administrative rooms, parking lots, and study and outreach areas, In addition to the university campus, it is located next to the San Javier Library Park, the Samuel Barrientos Educational Institution and 400 meters from the metro station.

These are 15 buildings that will communicate with each other, which are founded between communes 12 and 13, and whose campus is emerging as a city space that, in addition to educational facilities, It will have open areas for the enjoyment of the community.

“They are 37,000 square meters, of which 12,000 are inside the university citadel, but they are for public access and enjoyment of the community, and about 25,000 square meters that if constituted as public space,” explained the Assistant Manager of Design and Innovation. from the Urban Development Company (EDU) Nicolás Rivillas.

Mayor Daniel Quintero assured that the project is 94% complete, “We still need to equip it with the technology we need so that students can become champions of the fourth industrial revolution”.

To the beat of the 21st century

In addition, he specified the focus of the educational programs that will be offered there: “8,000 students each year will be training in careers related to big data programming, data analytics, blockchain, artificial intelligence and the Internet of Things. It is a fundamental project for the strategy of Medellín Valle del Software“Said the mayor of the city.

The university campus will have the possibility of having the academic programs of the best public universities in the city, among them Pascual Bravo, the Metropolitan Technological Institute of Medellín (ITM) and the Colegio Mayor de Antioquía, who in an alliance with companies such as Platzi, Google, Microsoft, Coursera, LinkedIn, in addition to Sena, among others, will assume responsibility for the construction of the contents and the courses issued by said study house.

The teaching study model that will be taught on campus will have a novel educational offer, geared towards job relevance, focused on creating people with skills for the fourth Industrial Revolution, which means that the Ciudadela Universitaria de Occidente will not be a conventional educational institution, but rather a space for convergence of higher education institutions whose programs are mainly associated with the strategic line of the Software Valley.

“In the Citadel of the West there will be spaces for certain areas that respond to the relevance with respect to the demands that exist in the context. We have four specialized spaces that are developed in administration, graphics, digital administration laboratories and a 4.0 center of excellence within the framework of the fourth industrial revolution. This project is articulated with the Ciudadela Universitaria @ Medellín, a platform that will carry academic programs under the virtual modality ”, specified Juan Pablo Arboleda, rector of the Pascual Bravo University Institution.

Likewise, the director of the Higher Education Agency of Medellín –Sapicience- Carlos Chaparro, when asked how the access to the educational offer of the citadel will work, explained that: “The citadel would be like an airport where different companies would come to offer related services, including institutions that are not universities but are strong in the area of ​​software, including international institutions”, said. So Ruta N could participate in the project under a shared administration model, also announced that in September, the educational proposal would start with 1,000 or 2,000 young people who are going to train and go out to work in this entity for 10 to 12 months. “The citadel would be a generator of employment,” he concluded.

Blockchain technology, is a tool strongly associated with Cryptocurrencies, had its origin as the technology behind such digital assets. However, due to its characteristics, this platform is applicable to other areas and sectors, so it has gradually been introduced in the educational sector. Thanks to its friendly, reliable and efficient technology, today more institutions have agreed to join in the use of this technology.

The Medellín Higher Education Agency –Sapiencia- not only promotes the mega project of the City, “The University Citadels ”If not, together with the Mayor’s Office of Medellín and the Secretaries of Economic Development, they promote a program “In formation of Specialized Talent” in Industrial Blockchain technology, which seeks to train professionals for Industry 4.0.

Simultaneously with these programs, other projects are being implemented in the town, which foresee that by 2023, Medellín faces the challenge of integrating into Industry 4.0, positioning itself as a technological reference in development, technological, financial and educational.

The city of Medellín, se has become a point of reference as a study center for robotics, virtual reality, disruptive technologies, blockchain technology, internet of things, as central elements in the deployment of the fourth Industrial Revolution.