Since the beginning of the cryptocurrency expansion we have found scams or ponzi schemes along the way, some have been unmasked and definitely established as fraudulent systems.

This system of scams continues to appear more and more. Like traditional business, the crypto world is peppered with these types of criminal practices.

Tulip Research set about investigating Kuailian to demonstrate that it is a ponzi scheme, but the company affected in a statement tries to deny the forensic consultant.

This time we will talk about Kuailian, a company that is supposed to be an investor in masternodes and redistribute the profits to the “investors”. While the operation of the masternodes themselves is an investment, each masternode executes functions for which it is programmed, depending on the blockchain it is run on.

Usually the most common features are around enabling instant or anonymous payments. They are also used as part of a decentralized governance system where node operators vote on development issues related to the blockchain in which they participate.

For each verified operation, the masternode has a passive commission for the approved transaction, and that is where the company Kuailian claims to have an investment system that enables virtual acquisition of these masternodes, which redistribute commission money among investors.

Now, Kuailian is a company that is registered in Estonia, the data is public and verifiable, however, there are doubts about the veracity of it, there are those who question that this data is a guarantee of the functionality of the company, because Through a specialized company, you can register in Estonia or in other European countries without even residing there.

Through an investment program, it asks for a non-refundable association premium, and then you must acquire some of the licenses that the platform has to be part of the investors, depending on the degree of risk it would be the degree of profits to be obtained.

On the web there is a lot of contradictory information in relation to this platform, reality indicates that it may be a platform with a fairly low level of risk for those who trust it.

The truth is that Tulip Research has set its sights on it, it has published quite detailed information on the platform. In that publication they also explain that the earnings on which so much is talked about, it is unlikely to reach them due to the lack of liquidity with which the platform operates.

In fact, at press time, Dash indicates a 5.89% annual return, a number that compared to the profits they offer on the platform do not coincide, since, according to data published by Tulip Research, Kuailian has invested more than 60% of investor money on Dash nodes.

The platform also offers a machine learning service that basically deals with finding the most profitable masternodes available in order to guarantee the profitability of the investment, and therefore the diversity of the nodes it has to redistribute the profits.

However, Kuailian indicates in its initial information that the investment will be returned in the next 1,000 days, plus the gains are immediate after the investment plan is paid. This with the possibility of reinvesting as many times as necessary. It also has a referral scheme that allows generating additional earnings to those usually received by the initial investment.

Before these accusations of scam Kuailian responds

Unlike other proven scam platforms, Kuailian dedicated time and space on their platform to “deny” claims about the suspicion of being a ponzi scheme.

On the official page of the platform, a 17-page document is hung in which he is disassembling point by point the claims of the Tulip Research report.

Each of the statements that make up the report is categorically refuted with reasoning and in some cases with images to illustrate the operation of the platform.

Namely, the Tulip Research report contains a flow chart indicating the “Flow of money”. The money is recycled between Binance and Kaken, Tulip Research claims that the money received in investment or membership, enters the centralized Exchange, converted to tokens and then transferred to Kraken in Ethereum and there the route of the money is lost.

Based on these statements, Kuailian explains that the process is “necessary”, the functionality of the parities of the coins requires it.

That is, the money enters Ethereum, they are converted to Bitcoin and from there to the token that is beneficial for the masternode, but that this operation does not in any way imply that the money is being recycled.

Then a technical analysis is made on the profitability of investment pools on invested tokens, again, contradicting what Tulip explained in his report.

Regarding the registration of the company in Estonia, Kuailian indicates that, although they use a specialized company for registration in Estonia, this does not imply that they are not complying with the regulations for registration, and even dismiss the seriousness of the report for showing indications that the platform is a scam.

This is how the document is developed, in each element that Tulip Research emphasized to demonstrate that it was a scam, in a statement Kuailian detailed each part of that report and reasonably expressed his arguments, but curiously, he did not refute a conversation of one of the collaborators with Crypto Verification Coin, who would be – according to Kuailian – one of the tokens in which they have been invested with the masternodes. Tulip Research notes:

As if that were not enough, a collaborator has sent us a conversation with one of the top managers of the Crypto Verification Coin currency through the official Discord channels, which we have been able to verify.

The translation of Dennis’s response regarding CVCC is as follows:

This platform has just started its activities, so only time will tell who was right, whether Tulip Research in its report or, on the contrary, the Kuailian company is a valid investment platform.

We will closely follow this or other platforms that are part of the crypto world and that generate controversy, as well as Btc Surf made the news in April this year, it is already a platform that ceased its activities and was shown to be a ponzi scheme.

Just as this information derived from Crypto Verification Coin was omitted, it is also omitted a particular information that was disseminated on the social network Twitter, in which Fernando Gutierrez «@fernado», CMO of Dash Group, when viewing the information revealed by Tuliap Research , aroused the curiosity of being able to know if in the investigation, the claim to possess 200 Dash masternodes were true.

Much curiosity that could not be dispelled with tests that demonstrate having the 200 masternodos that it refers to having Kuailian.

In the same way, when the official Zcoin channel was consulted for the possession of the 105 masternodes that it presumes to have in its investment portfolio, it referred to and urged taking the reading of the Tuliap report to rule out the veracity of the data supplied by Kuailian. .

Another inconsistency found in Kuailian’s response to the public lies in the market volume of the cryptocurrencies he works with. For this Tulip Research defined the market volume, market capitalization and liquidity in a simple way:

“First of all, liquidity should not be confused with volume. Both terms go hand in hand but they do not mean the same thing.

Liquidity is the predisposition to exchange at a certain price level. In this case, we use order books to establish and check the liquidity level of a cryptocurrency.

Volume is simply the number of currencies that have been traded during a certain period of time, it is usually customary to display in the period of the last 24h.

Just because X amount of coins has been traded in the last 24h does not mean that the same will happen in the next ones. Past volume cannot be used as an instrument to measure the current liquidity of an asset.

Given these statements, Kuailian tried to deny that the data and calculations offered by Tulip are false, and they go on to analyze the data provided as follows: 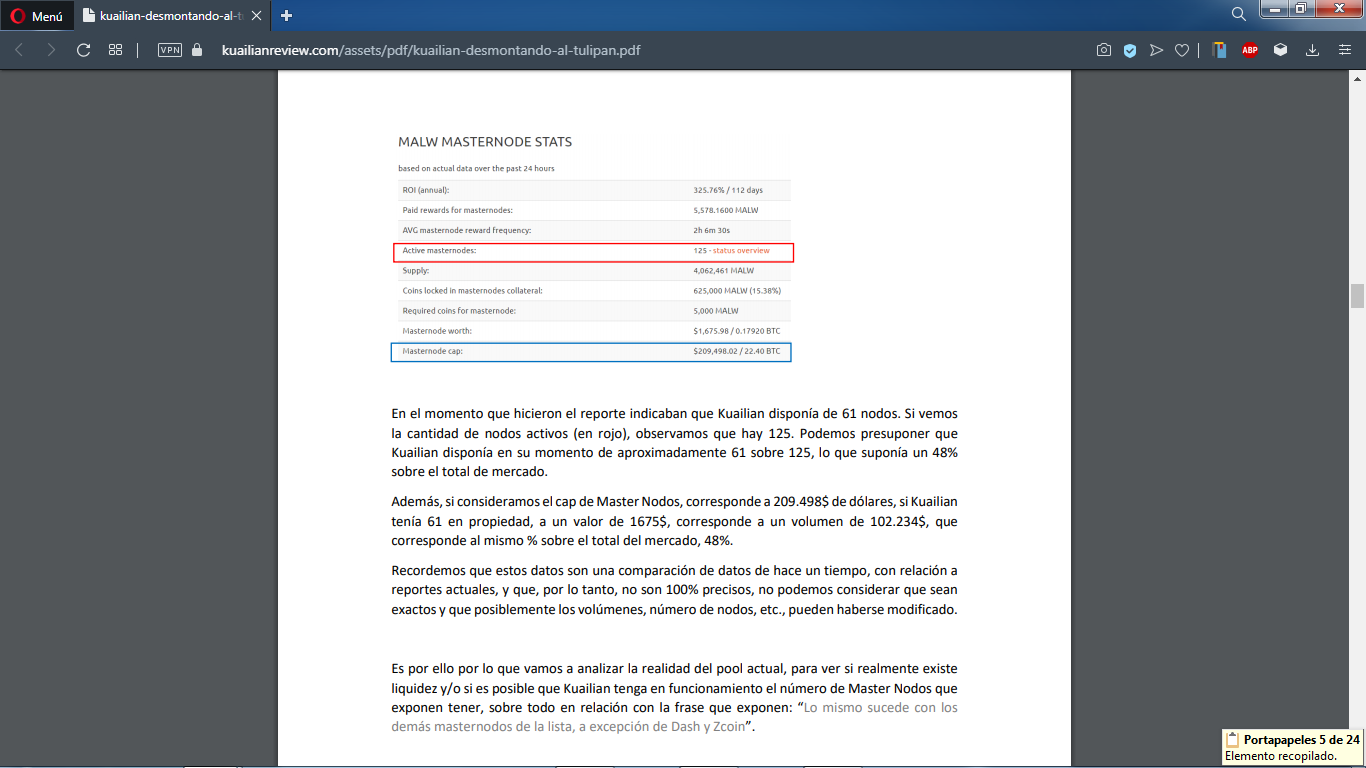 This explanation clearly confuses the terms, market capitalization does not determine liquidity or market volume, as indicated above.

The trading (to be as clear as possible) of an asset is what is known as market volume, and Kuailian does an arithmetic operation that doesn’t really show liquidity or market volumeHe only tries to demonstrate that by “owning” X quantity of masternodos by way of consequence they have the market volume that they claim to have and from which they obtain the liquidity that is used for the redistribution of profits.

An additional but not less important fact is related to the license that it claims to have, since As of June 30, 2020, the license that had the platform was suspended until August 31 of this year.Tulip Research reflects this on twitter.

At the same time, the Kuailian team informs its investors / users that the suspension on which they have been subject will only last for 15 days, due to a supervision that is initiated to determine that they are complying with the corresponding regulations.

The truth is that the information provided by the Kuailian team does not correspond to reality, in such a way that it generates mistrust within the community by providing false information about their suspension.

For this reason, and for the pyramid reward systems that the platform has, as well as everything that has been explained in this article, it has been crossed out as a scam or a ponzi scheme.

So far, many things play against the platform, the number of inconsistencies and the benefits it offers are not entirely credible, however, it will be the executioner of those who support the platform, if it turns out to be a scam or if by the On the contrary, it is a novel system of generating funds passively.

The views and opinions expressed here are solely those of the Author and do not necessarily reflect Cointelegraph’s views. Every investment and commercial movement involves risk. You must do your own research when making a decision.